A whale of a time.

Hello and welcome after a very, very long time to my latest publication. I have recently spent two months on the road with my brother taking in some of the incredible sights Australia has to offer. It was truly a fantastic adventure and of course it was essential to try and spot some some of the iconic wildlife the country has to offer. We were treated to some memorable encounters but there was no way we could be prepared for one unforgettable morning en route to the Neptune Islands.

When you think of Australia you may think of stunning beaches, breathtaking views, glorious weather and BBQ's a plenty and of course iconic wildlife. It was the native fauna that my brother and I were particularly keen on seeing and right at the top of our list of creatures to see was the infamous Great White Shark otherwise know as the White Pointer. To do this we decided we would need to take the plunge quite literally and make our way from Adelaide to Port Lincoln a city famous for its seafood and its cage diving with Great Whites.
On the day of the dive we  awoke bleary eyed at the sound of our highly unsociable alarm clock, We had real hope that today could be the day we got ourselves a first hand view of one of the oceans most powerful predators. Once we met our fellow drivers and  instructors we were given a health and safety brief over breakfast. Everyones enthusiasm continued to grow as we boarded the boat for the two and a half journey towards the Neptune Islands. We were warned the final hour could be uncomfortable, however the first hour and a half travelling along the coast of the national park should be pleasant  and provide some excellent opportunities to spot some of the other wildlife found in  the area. It did not take long for that to come true. A  first fleeting glimpse of a common dolphin  proved to be the start of one the most memorable mornings of our lives. As we moved our way up the coast we came across Australian Pelicans, Ospreys one even sitting on a nest, White Bellied Sea Eagles and a colony of New Zealand Fur Seals. These endearing pinnipeds are one of the principle targets of the sharks and it was hard not to feel sympathy for them as took in the early morning sun temporarily at least out of reach of the danger awaiting their return to the water.


True to our instructors predictions once we started to hit the open water the waves started to get rougher and the chatting died down as people focused on keeping the horizon in their eye line and not regurgitating what they had for breakfast. With these two objectives firmly in mind further wildlife sightings seemed unlikely. That was until one of our instructors casually announced to us that there was a whale outside if anyone was interested. Que stampede as despite the increasingly rough conditions we staggered and swayed to our feet. Out on deck doing our finest Bambi on ice impressions we scanned the waves desperate not to have already missed the sighting. Suddenly an enormous shape in the form of a young Humpback Whale broke the waves. It nearly took our breath away a fleeting glimpse before disappearing back under the water. Seconds later it appeared again as we scrabbled for a better view and optimistically attemptesd to take pictures. Soon it became clear that we had been joined by numerous Common Dolphins and then by Albatross flying overhead. It honestly reminded me of a scene from the groundbreaking television series Blue Planet.  The young whale which our instructors theorised may have become lost on migration continued the pattern of fleeting glimpses for a couple of minutes before appearing in view one last time  going beneath the surface for good. All being well it got itself back on course for its migration in the process. No one was in any doubt how special the sighting was and it was further confirmed how lucky we had been when we learned that was only one of roughly half a dozen sightings in ten years.


Ultimately the poor weather which had been in the area for the days prior to our arrival in Port Lincoln had an adverse effect on our opportunities to spot sharks. Despite the crews best efforts and hours of patience we were forced to accept defeat as evening approached and the sharks continued to hug the deepest layers of the ocean out of range of our surface to air breathing apparatus. On the way back on the boat as we sampled some of Australia's finest beer and reflected on the day and how incredibly lucky we had been despite drawing a blank with the sharks. And as the sun started to set we were treated to one last sighting as a  pair of dolphins broke the surface in tandem and disappeared into the distance. Days like that special day in Port Lincoln  create memories that will last a lifetime, thank you for reading ! 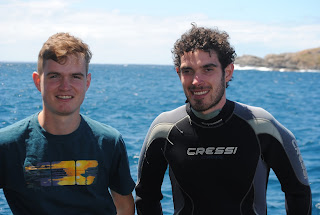